Rate Us:
Request an Appointment 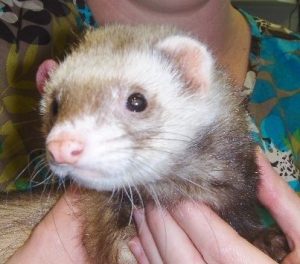 Ferrets are popular, entertaining interactive indoor pets. Their average life span is 6 to 8 years. When fully grown, females weigh about 1.5 lbs while males are generally about 2.5 lbs. Ferrets come in many color variations: most are shades of brown, gray and black with the mask, feet and tail generally being the darkest in color. The red-eyed white breed of ferret, commonly called an “albino”, was bred for the trait of eye color. This trait can make albino ferrets sensitive to bright light, among other visual difficulties. Ferrets enjoy the company of other ferrets as well as people. They love to roll around and wrestle as well as snuggle with each other and are a joy to observe!

Ferrets are very playful animals, much like kittens or puppies that never grow up. They have many behaviors related to play and play “hunting” which confuse or even frighten people unfamiliar with ferret body language. The most common action is the “wardance,” during which a ferret arches his back, throws his head back with the fangs bared, puffs up his tail and maniacally bounces forward, backwards, and sideways. As unnerving as this dance may seem, it is only an invitation to engage in play. Another common signal is to paw the ground, which is a challenge to a play fight. Paw the ground yourself to coax your ferret to jump at you, then retreat repeatedly. Your ferret may then “attack” your hand or wrist, wrestling it down in an attempt to “kill” it. All ferrets have an affinity for people and want to include their parents in their play. This is a major bonding component in a ferret’s life. Nipping, which is pinching the skin hard without breaking it, is another invitation to play. Some kits (young ferrets) never nip, but most do and, though they do mellow with age, this is a normal communication process with ferrets. Due to extremely strong jaws and small, sharp teeth, a young ferret easily can break a person’s skin during these games. The ferrets’ thick fur and skin protects them when they play together. It takes a while for them to realize that humans have only thin skin and no fur, which is no protection against bites. When your ferret bites or nips too hard, simply do what is natural and yelp in pain. Try not to pull your hand away; that reaction usually causes them to nip harder. This behavior, although natural for ferrets, makes it inadvisable to ever allow them to play with children unsupervised. Once they recognize that they are hurting us, ferrets modify their play so as not to do damage. This rough play is an essential part of a ferret’s life, especially when young.

Ferrets are social creatures who enjoy visiting with people, so let them roam frequently in a secure area outside of their cages. Although they have a great sense of smell and acute hearing, ferrets have limited vision, which means you should avoid sudden movements and speak in a gentle voice before approaching. Ferrets have fragile skeletons so be sure to handle them carefully. Never pick up a ferret by the tail; instead, let the ferret come to you, then lift him from behind using two hands—one to support his chest and one to cradle his hips. You can also grasp the scruff of a ferret’s neck and support his bottom with your hands. Remember, too, that ferrets are known to nip. If you point a finger at a ferret or poke him, he may think you’re an enemy or a source of food and react by nipping your finger.

Ferrets’ ancestors were den animals, so the home you create should be like a den, too. Use a wire cage that’s at least 18 inches long, 18 inches deep, and 30 inches wide. Many ferrets prefer multilevel cages which feature stairs or ramps they can climb and shelves or hammocks where they can perch or sleep. Avoid aquariums because of poor ventilation. Since ferrets are accomplished escape artists, the cage should feature a secure latch and openings no larger than one inch by two inches. Wire flooring is uncomfortable to a ferret’s feet, so place linoleum tiles on the floor or line the cage bottom with soft material such as washable carpet. Not all materials will work, however: Wood flooring is difficult to disinfect, newspaper will blacken a ferret’s feet, and both cedar and pine chips hold in bad odors and may even cause respiratory problems. Place the cage away from direct sunlight, in a cool, shaded area where temperatures range between 55 and 70 degrees. Clean a ferret’s home by washing the cloth bedding with a mild detergent and hot water and disinfecting the cage with a mild soap.

You can save time cleaning a ferret’s cage by simply teaching the animal to use a litter pan. Find a small cardboard or plastic tray that is three to five inches high to serve as a litter box and secure it to one side of the cage, away from sleeping and eating areas. Preformed plastic corner litter boxes can be found at major pet store retailers. Clumping litter will irritate a ferret’s eyes and may cause respiratory problems, so fill the litter tray with one inch or more of pellet type litter (Yesterday’s News) products made from paper or plant fibers.

Ferrets have rapid metabolisms and awaken to eat about every four hours. Fresh water and food should always be available to them. Ferrets eat only what they need and leave excess food for later. Ferrets must be fed a high quality dry ferret food. Hard food helps keep your ferret’s teeth clean and makes their feces less smelly than when they eat canned food. The food should contain from 32% to 36% protein (half of which should be derived from meat), at least 18% fat and the supplement taurine to prevent urinary tract problems. Vitamin supplements are not necessary if the ferrets are fed high quality food. Nutri-Cal and Ferretvite are supplements used mostly for ill or undernourished ferrets.

Many ferrets are neutered and have their scent glands removed before being adopted or sold. Neutering is needed for females not used for breeding to protect them from developing a fatal anemia due to their heat cycles. Males should be neutered to decrease aggression; neutering also helps diminish their musky odor. Ferrets still have oily glands dispersed through their skin that give them a musky odor even when they are de-scented. Frequent bedding and litter changes help to control their natural body odor. Occasional bathing with kitten or ferret shampoo or diluted baby shampoo can also help, but bathing too frequently will only force the animal’s scent and oil glands to work overtime and cause them to smell even muskier.

Ferrets, like dogs and cats, are susceptible to rabies and need to be vaccinated annually. They are also vaccinated against canine distemper virus, which is fatal to ferrets, annually after a series of boosters as kits. Ferrets need preventative health care through regular check-ups at least annually. A “new ferret” exam will help screen your pet for contagious diseases such as ear mites, fleas, ticks, intestinal parasites and ringworm. Annual examinations continue to monitor for these conditions as well as assess the health of your ferret’s teeth, skin, heart and internal organs.

Young ferrets are susceptible to intestinal blockages. They tend to squeeze into small spaces in a house and can eat very small household items without being detected. Their best protection from needing surgery to remove foreign items is to never allow them free roam of the house. When out of their cages, they need watchful supervision at all times. Ferrets of any age are susceptible to human influenza. They can exhibit lethargy, lose of appetite or sneeze and need treatment to prevent dehydration. Older ferrets are prone to heart disease and tumors. Common tumors include those involving the lymph nodes or lymphatic system, adrenal glands and pancreas. Many of these conditions can be managed, if not cured, so that your ferret lives a long, comfortable life as a beloved family pet.